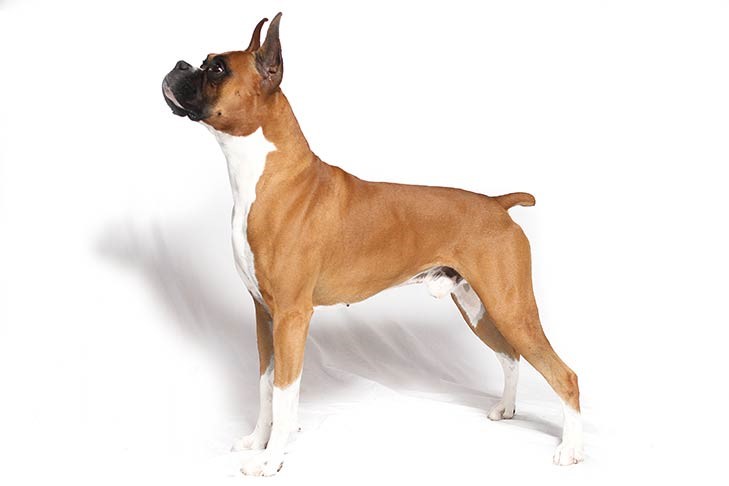 The Boxer, previously called the Deutscher Boxer, the German Bulldog and the German Boxer, is a product of centuries of selective breeding. Today’s Boxer was largely molded by Germans during the late nineteenth and early twentieth century’s and probably is a distant relative of the English Bulldog. Boxers are particularly recognizable by their broad, blunt muzzle and flat-faced head, both of which are unique to the breed. The first Boxer was registered with the American Kennel Club in 1904, and since then its popularity has skyrocketed. It is prized as both a guardian and a family companion, being bold, exuberant, affectionate, alert, self-confident and utterly loyal. Boxers are used in military and police work and as a breed were one of the pioneering guide dogs for the blind. They also are used as sensitive seizure-alert dogs and can succeed in agility, obedience and conformation as well. While playful and patient with its family, the Boxer tends to be wary with strangers and fearless when threatened.

The small, so called Brabant Bullenbeisser is regarded as the immediate ancestor of the Boxer. In the past, the breeding of these Bullenbeissers was in the hands of the huntsmen, whom they assisted during the hunt. Their task was to seize the game put up by the hounds and hold it firmly until the huntsman arrived and put an end to the prey. For this job the dog had to have jaws as wide as possible with widely spaced teeth, in order to bite firmly and hold on tightly. A Bullenbeisser which had these characteristics was best suited to this job and was used for breeding. Previously, only the ability to work and utilization were considered. Selective breeding was carried out which produced a dog with a wide muzzle and an upturned nose.

The Boxer should do well on a high-quality dog food, whether commercially manufactured or home-prepared with your veterinarian’s supervision and approval. Any diet should be appropriate to the dog’s age (puppy, adult, or senior). Some dogs are prone to getting overweight, so watch your dog’s calorie consumption and weight level.

Boxers may look like imposing figures from afar, but up close and personal they are playful and loving family companions. Often dubbed the Peter Pan of dogs, Boxers are highly energetic, and as they grow into adulthood, they never lose the desire to romp and play like a puppy. Perpetual cuddle bugs, Boxers will try to wriggle into even the smallest spaces possible to get close to the ones they love. The Boxer’s short, shiny coat requires very little grooming. A good once-over with a rubber curry-brush or a hound glove once or twice a week should keep him looking his best. The Boxer tends to be a clean dog, needing a bath only occasionally.

Early socialization and puppy training classes are vital in channeling the breed’s energy and exuberance in a positive way. Boxers are highly intelligent, but can become bored with repetition. They tend to have a mind of their own and are excellent problem solvers. Not always tolerant of other dogs of the same sex, most Boxers of opposite sexes enjoy each other’s company. Boxers excel in a wide range of canine sports, including obedience, agility, and herding. Boxers are very playful, high-energy dogs. They need ample exerciseevery day, on leash or in a securely fenced area. The Boxer must never be allowed to run loose. The breed’s heritage as a chaser of wild game means that they spend a good deal of time jumping and leaping about—as young dogs, they are constantly in need of reminders to teach them to stay “down.”