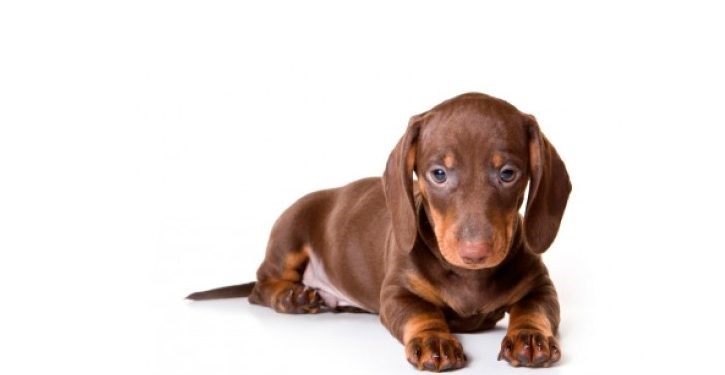 The Dachshund, also known as the doxie, the Hot Dog, the Sausage Dog and the Wiener dog, was actually named for the German phrase meaning “Badger Dog.” The German word dachs means ”badger” – another animal with a sturdy body on short, crooked legs. The Dachshund was developed because of its ability to track prey and “go to earth” to attack badgers and other burrowing mammals. True to its origin, the modern Dachshund participates successfully in field trials and earth-dog tests, showing its keen hunting instincts and go-to-ground hunting ability. Despite its exaggerated and almost comical appearance, the Dachshund is a very smart and athletic dog that makes an excellent house pet.

Dachshunds aren’t built for distance running, leaping, or strenuous swimming, but otherwise these tireless hounds are game for anything. Smart and vigilant, with a big-dog bark, they make fine watchdogs.

The origins of dachshunds have been obscure by time. The smooth variety is the oldest and is thought to have been produced by crossing a short Jura Bruno with a Pinscher. The Smooth Dachshund gave rise to the other two varieties. Type was fixed for the longhaired variety in the 17th century. The wirehaired variety was created late in the 19th century by crossing smooth dachshund, the Schnauzer and the Dandie Dinmont Terrior and the Scottish terrier. Dachshunds were recorded in the English stud book as German Badger Hounds in 1874, contributing to the mistaken belief that Dachshunds are hounds rather than terriers. As long ago as 1906, a breed expert commented: “That it is used occasionally as a hound in the sense that it follows rabbits and hares by scent as does a beagle, does not alter the fact that it is essentially a dog that goes to earth and is therefore a terrier.”

It is extremely important that a Dachshund not be allowed to become overweight. This is not only because of general health reasons, but also to avoid strain to the Dachshund’s long back, which can lead to slipped or ruptured (herniated) discs. Ignore the pleading eyes, and give only the recommended amount given by the manufacturer of the quality dog food of your choice. Dachshunds are moderate shedders, relatively clean, and have little or no body odor. The breed’s grooming needs vary with the three coat types. Smooth-coated Dachshunds are somewhat “wash and wear,” needing little beyond a wipe with a towel or hound glove to look dapper. Longhaired Dachshunds may require more frequent brushing, depending on the thickness of the coat. The Wirehaired coat can be plucked or hand-stripped several times a year to look its best, but beyond that is easy to maintain between groomings with occasional trimming of the beard and eyebrows and brushing or combing once or twice a week.

Many owners think that because they are so small, Dachshunds don’t require more exercise than just running around the house. However, they do need regular exercise not only to stay fit, but also to build strong muscles to support and protect their back. Two walks every day of moderate length should be sufficient. To avoid injury, never allow your Dachshund to run up and down stairs or jump on or off furniture.

Dachshunds are very intelligent but are also independent and often stubborn, so they can be a challenge to train. They love to give and receive affection and do best with positive, reward-based training. They are sensitive and will not react well to harsh commands or punishment. Patience and consistence is key to dachshund training.