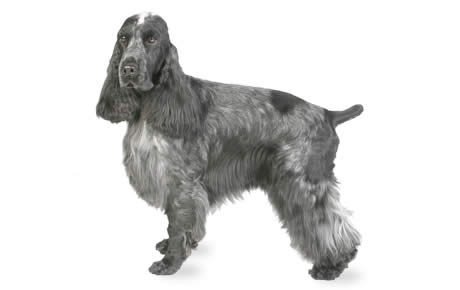 The English Cocker Spaniel has an extremely happy, affectionate and loyal personality, which gives it the nickname “the Merry Cocker.” This is a terrific breed for families, particularly the show type, as they get along extremely well with children.

Before the 17th century, all members of this group of dogs were classified as “spaniels,” regardless of whether they were large or small, long-bodied or short, fast or slow, long-coated or short. Gradually, the size differences made an impression on hunters, and the larger dogs became used more so for springing game, while the smaller ones were used to hunt woodcock and other birds. The names Springer Spaniel, and Cocker or Woodcock Spaniel, naturally followed the skills of the developing breeds. The Kennel Club (of England) officially recognized them as distinct breeds in 1892. However, both types were found in the same litters even after their official separation by the English Kennel Club, with size being the dividing line between them. The Cocker and the Springer developed side by side, with the same heritage, coloring, hunting skills and general type. They were valued as great work and companion dogs during the 1900s. The larger dog developed as the English Cocker Spaniel, and the smaller dog developed into the American Cocker Spaniel.

Like all dogs, English Cockers have a mischievous side. They’re also chow hounds. Keep food and garbage out of reach, as well as anything else you don’t want them to get into, especially during the curious puppy period. A crate is a great way to prevent your English Cocker from getting into trouble when you’re not around to supervise.

Teach your English Cocker with a gentle hand. He has a sensitive spaniel temperament and won’t respond well to harshness. Use positive reinforcement techniques such as food rewards, praise, and play. He’s a fast learner, and if you make training consistent and fun, you’ll be more than pleased with his abilities.