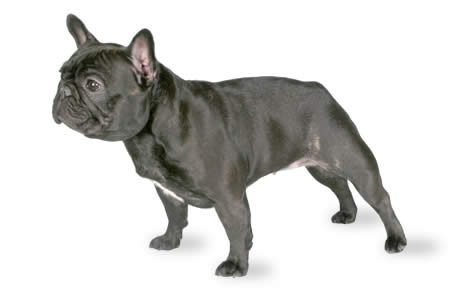 The French Bulldog has always been a companion dog: small and muscular with a smooth coat, short face and trademark “bat” ears. Affectionately known as the Frenchie, it is loved for its endearing nature and even disposition.

In the mid-1800s, a toy-size Bulldog found favor in some English cities, including Nottingham, then a center for lace making. The toy Bulldog became something of a mascot for Nottingham’s lace makers. This was the height of the Industrial Revolution in England, and such “cottage industries” as lace making were increasingly threatened. Many in the lace trade relocated to northern France, and of course, they brought their toy Bulldogs with them.

The little dogs became popular in the French countryside where lace makers settled. Over a span of decades, the toy Bulldogs were crossed with other breeds, perhaps terriers and Pugs, and, along the way, developed their now-famous bat ears. They were given the name Bouledogue Français.

Paris eventually discovered the delightful new breed, and thus began the Frenchie’s reputation as city dog par excellence. The breed came to be associated with Paris café life, and with the bon vivants and fancy ladies who sought nocturnal pleasures in Parisian dancehalls. Edgar Degas and Toulouse-Lautrec depicted the Frenchie in paintings of the Paris demimonde.

Although the Frenchie is a fun-loving dog, it has minimal exercise needs. It loves an outdoor romp but does not enjoy hot and humid weather. In fact, the French Bulldog is not suited for outdoor living and cannot swim.

A short on-leash walk is adequate to fulfill most of the dog’s physical needs. Coat care is minimal but the facial wrinkles of the dog need regular cleaning. In addition, Frenchies tend to snore, drool, and wheeze