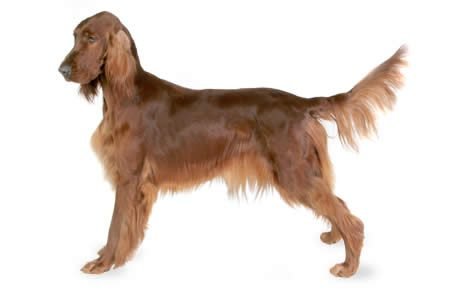 The Irish Setter, is an impressive breed best known for its hunting skills, flashy style, powerful movement and clownish personality. The Irish Setter has been described as being perhaps the most glamorous and unforgettable of all modern dog breeds.

It’s not surprising that this handsome redhead comes from Ireland, which is famous for fine and beautiful dogs. The Irish Setter appears to have been developed there in the 18th century, probably the result of combining English Setters, spaniels, pointers, and Gordon Setters.

Those first Irish Setters were sometimes called red spaniels — a clue to their heritage, perhaps — or modder rhu, Gaelic for “red dog.” Often, they were white and red instead of the solid dark red we see today. Some, described as “shower of hail” dogs, had red coats sprinkled with small white spots. The Irish Earl of Enniskillen may have started the fad for solid red dogs. By 1812, he would have no other kind in his kennels. Other Irish breeders of the time who preferred the red dogs were Jason Hazzard of Timaskea in County Fermanagh and Sir St. George Gore.

A dog named Elcho was the first Irish Setter imported to the United States. He arrived in 1875 and became a star not only in the show ring but also in the field.

The Irish Setter should be fed a high-quality dog food appropriate for the dog’s age (puppy, adult, or senior) and activity level. Learn about which human foods are safe for dogs, and which are not. The breed can experience bloat, a sudden and life-threatening swelling of the abdomen, and owners should educate themselves about its symptoms and what to do should bloat occur.

Like most Sporting breeds, Irish Setters need plenty of daily exercise. This can come in the form of long daily walks and play sessions with their owners—Irish Setters love to be with their people.

The Irish Setter’s stunning rich-red coat requires moderate grooming to look its best. Irish should be brushed at least twice a week with a pin brush or a soft bristle brush; a long-toothed metal dog comb can also be used to help work out any tangles or mats that may be starting to form. The nails should be trimmed once a month.