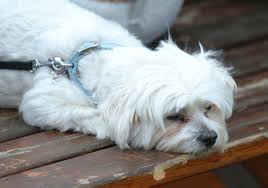 Addison’s Disease, which is also called hypoadrenocorticism is caused by decreased hormone production from the outer part or cortex of the  under active adrenal gland..This  disorder is named after Thomas Addison, a British scientist, who is credited for being the first person to demonstrate that adrenal glands are necessary for life.This condition, Addison’s disease is more difficult to diagnose than cushing’s disease because, typically, the illness comes and goes,.However it is a A rare disease in dog but more common than in human where every  one person in 100000 affected.

To understand the Addison’s disease we have to have some insight about the basic structure and function of adrenal gland . The adrenal glands are small, paired glands located near the kidneys. Each gland consists of an outer cortex and an inner medulla. In Latin, “kidney” is “renal” and “next to” is “ad.” These small glands are therefore called the adrenal glands because of their location The glands  mainly produce two important hormones (Steroids) that regulate a variety of body functions and are necessary to sustain life. The two hormones are cortisol, a stress hormone, and aldosterone, a hormone that regulates the body’s levels of the minerals  mainly sodium and potassium. Sodium and potassium levels are important for maintaining the body’s fluid balance. Without these hormones, the dog’s body condition and health  deteriorates, leading to serious complications and even death. 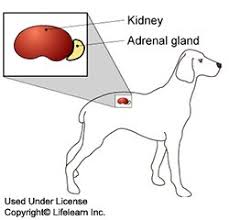 What causes the Addison’s disease?

In most cases, the cause of Addison’s disease in dogs is unknown. The etiology may be immune-mediated destruction of the adrenal cortex, drug-induced adrenocortical necrosis (mitotane), enzyme inhibition (trilostane), or infiltrative processes such as neoplastic or fungal disease. Much less commonly, dogs have signs of cortisol deficiency, but no electrolyte changes. Hypoadrenocorticism typically results from immune-mediated destruction of all adrenocortical layers, resulting in deficiencies of mineralocorticoids (aldosterone) and glucocorticoids (cortisol). A small number of dogs suffer from glucocorticoid deficiency only. The outermost layer of the adrenal gland produces hormones(aldosterone) that help maintain the balance of sodium, potassium and water in the body. When not properly balanced, this can result in an inability for muscles, including the heart, to function. Aldosterone,  helps to maintain blood pressure and water and salt balance in the body, by helping the kidneys retain sodium and excrete potassium. When the aldosterone level falls too low, the kidneys are not able to regulate the body’s salt and water balance. Dog will urinate sodium right out of her system, causing the blood pressure to drop and leaving severely dehydrated and shaking. The next layer of the adrenal gland produces cortisol (much like prednisone) which is important in metabolism of protein, carbohydrates and sugars.

Some dogs undergoing treatment for cushing’s or hyperadrenocorticism in which there is overproduction of these hormones, may become Addisonian if the Cushing’s treatment destroys the outer adrenal gland layers.  This last condition is known as iatrogenic hypoadrenocorticism and is generally temporary. A secondary form of Addison’s disease can result from a tumor or defect in the pituitary gland, which is an important hormonal regulator located in the brain.

Addison’s disease causes vague symptoms that are often seen with many other disorders such as kidney failure, general stomach/intestinal upset and infectious diseases, among others.Hair loss (alopecia)  can also be seen. There is drop in blood sugar sometimes.

Addison’s disease can be a challenge to diagnose because 80-90% of the outer adrenal gland must be lost before symptoms are obvious enough..

Typical symptoms may vary from quite mild to severe:

Many dogs are not diagnosed with Addison’s disease until they have an “Addisonian crisis.”Sometimes this condition takes on a much more serious form resulting in sudden weakness, with severe vomiting and diarrhea, dehydration and eventually collapse and potentially in heart failure. Sometimes these patients have had a history of having a “sensitive stomach. This is considered a medical emergency. Immediate hospitalization and supportive treatment are needed.

How is Addison’s disease diagnosed?

Once the dog is stabilized from the crisis, veterinarians perform a series of tests to determine what caused the collapse and to rule out other diagnoses. They will perform blood test to get a complete blood count and biochemistry and will also most likely run a urinalysis. (Diluted urine).Changes in the level of electrolyte in the blood serum like low sodium, low chloride and high potassium are commonly seen..

The definitive test for Addison’s is the adrenocorticotropic hormone (ACTH) stimulation test. A low response to ACTH stimulation test used for the conclusive diagnosis of the disease.

Treatment for the disease

Addison’s disease is not curable. Your dog will need to take replacement hormones for the rest of his life, and the dosage may need to be adjusted as time goes by, especially during times of stress. It is very important that owners do not try to adjust the medication or change brands without consulting with their veterinarian, as this could lead to another hormonal imbalance. It takes time to find the right dosage and frequency for your dog’s Addison’s disease. Be prepared to visit the vet frequently for the first month after diagnosis, so that your vet can measure your dog’s hormones and his electrolyte levels. This helps him easy to find the right dosage for your dog

With appropriate treatment, your dog can live a long and happy life without much complications. 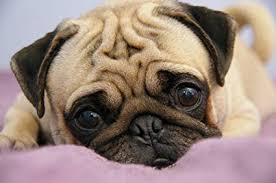